Jason Castaneda, a dubstep artist hailing from the vastness of Kill Devil Hills, North Carolina (the same place the Wright Brothers flew the first aircraft). This young gent is making a severe name for himself in the bass-music scene and we can assume the only way is up for him!
Please welcome Tephra to the storm!

Q1: Welcome to the storm! We are pumped to have you! What can you tell us about the origin story behind the Tephra craze?

A1: Thanks! I appreciate you giving me the opportunity to tell my story! I’ve always wanted to produce dubstep. I started listening to dubstep in around 2012/2013, but only started producing in 2018. Before that, I was mainly a DJ, making mixes on my iPad and eventually my midi DJ controller. I came up with the name Tephra in 7th grade (2014 or so) when I was in earth science class. I wanted to come up with a name for myself as a DJ/Producer and I was in an Earth Science lesson on volcanoes and volcanism, and the term “tephra” was a vocabulary word we were learning. Tephra is a term that describes the debris that comes out of a volcano when it erupts; I thought that was cool and it became my music alias. When I started producing music I went from “DJ Tephra” to just “Tephra”. I center my brand around heavy/dark dubstep with heavy influences from Lovecraftian Horror. My biggest electronic music inspirations are Code: Pandorum, Zomboy, Graphyt & Ecraze, Midnight Tyrannosaurus, and Axel Boy. I grew up listening to 90’s rap like Wu-Tang Clan and Tupac/Biggie Smalls so I have a big boom-bap rhythm influence that I try and insert into my music! I learned how to use FL Studio and Serum and those have turned into my greatest tools to produce!

Q2: You recently had a birthday! How does it feel to be at this new age and what do you expect different this year because of it?

A2: Yes I did! I just turned 19 years old on September 8th, and I really hope to accomplish a few ambitious projects by early next year. I expect my skill to grow and my creativity to flourish hopefully at a greater rate than last year, as I’m constantly learning and improving every time I open my DAW!

A3: My favorite part about making music is definitely coming up with an idea and bringing it to fruition. It’s the best feeling for me when I think of something I want to create and I successfully translate it onto my DAW; It brings me confidence and reassures me that I know what I’m doing because I doubt that about myself a lot.

A4: It depends; Remixes can definitely be easier because a portion of the writing for that song is already done by the artist(s) I’m remixing for, and it also gives me an opportunity to inject my style/sound into another person’s work, which is always an upside. One thing I dislike about remixing is how almost competitive it may seem. A lot of the time I’m doing a remix alongside so many other people, whether it be for a remix comp or just a remix ep. The pressure is always there to outshine everyone, at least for me, and to be the “best” one. At the end of the day though, music is subjective, and I have to constantly remind myself of that sometimes when remixing songs, especially songs that a ton of people like. With originals, the biggest pro I can give it is how an original track is 100% your ideas, and no one can take that away from you. However, it can be frustrating to constantly come up with new ones for each and every song. Then again, that is part of the job.

Q5: What has been the highest point in your career? Walk us through that moment of illumination

A5: A big highlight would be the release of my debut album Path Unknown LP. I worked 8 straight months on all of the tracks, some of them were in the works for a full year. It was super exciting to show off my creative skills in an unfiltered way, as well as showcasing the talent of my many friends who were kind enough to collaborate on some of the tracks with me for it. I plan on doing more with the songs early next year, but that project remains to be in the works so keep your ears out. Either way, releasing that project was such a relieving moment, and I loved every second of it.

A6: I really hope to expand my audience and truly have a group of people who can’t wait to hear the next Tephra tune. I know there are some out there already and I’m more than grateful for them, so that would be something I would like the see more of because frankly, I can’t see myself doing anything else in life besides something music-related!

Q7: Walk us through your ideology and creative process behind “Weapons”! What all went into that track?

A7: Fun fact about that track: The main synth you hear during the drop was my first attempt at using the Maelstrom Synthesizer in the Reason Rack. Maelstrom is a synth commonly used by riddim producers to make the signature sounds you hear a lot in the genre. I wanted to try my hand at making basses with it and I came up with the noise you hear in the drop of Weapons. With a bit of post-processing and some filter automations, I created the rhythm and melody of the drop. As for the intro, a lot of my intro melodies tend to sound like that, usually bouncy with an arp in the background and a lead melody on top of it all, and to accentuate the rhythm I use triplet drum patterns to get that bounciness. The track is in Ebm (or D#m) which I tend to use frequently like in my tracks Refund, Contact, Okami, and some others. The drop samples I used were Biggie Smalls acapellas from some of his songs. I also feature Biggie on the cover art of the track as well. That track was definitely different for me as I tend to keep the melodies in the intro and keep the drops heavy, however with this track I used a melody as the main feature of the drop, which is not something I do often.

A8: A lot of people, but I’ll give a short list: I would love a collab with Sadhu, Code: Pandorum, Motar, Aweminus, Sapisvr, Blazter, Marauda, Stayns, Ponicz, and a bunch more

A9: I want to give a big shoutout to my homies in my collective SHIFTRZ. SHIFTRZ as a concept stems from Lovecraftian Horror and Existential Dread, and everyone in the group represents it perfectly with their music. The homies MacDubz, Osmodeus, Chops, Euro, Oldone, Carnivore, and TrippyDubz, and my good friend KIRA who made the SHIFTRZ logo and did a ton of the art for the collective. She’s incredibly talented both graphic design-wise and music-wise! I also can’t forget to shoutout my homies Blade, MVKUTA, Revenant, BegaCat, Kronomikal, Riots Revenge/VIS, Terkoiz, SIX16, Panthr, Distort, Stayns, Solaroid, Vice Tempus,  MIDNI!GHT,  PVRTYFOUL, Crud, essentially everyone I’ve collaborated with, and of course my roommate Scarecrow.

LEESH – Can Only Venture Into Darkness [Track Write-Up] 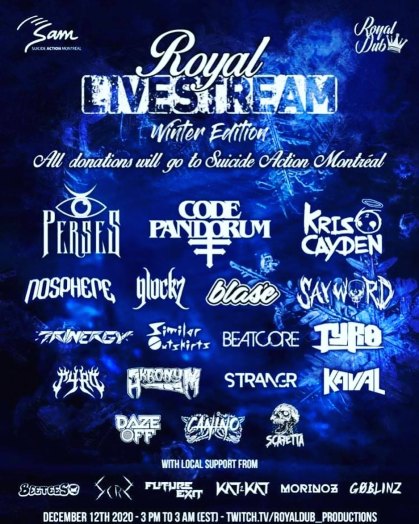 Hextheghost! Sorcerer Of Sounds In The Sacramento Area [Interview]