Astroreign. Having A Grip On The Galaxy With Cosmic Control

Ben Spadaro, or more spaciously known as Astroreign. A Melbourne resident with worldwide dreams and never-ending vision. This ambitious and talented bass-music producer is meteorically rising to the top in his ascension to the stars. Astroreign is inevitably destined for greatness, as his reign has only begun, it’s only a matter of space and time.
Please welcome Astroreign to the storm!

Q1: Welcome to the storm! We are pumped to have you!
What can you tell us about the origin story behind the Astroreign hysteria?

A1: Thanks! I’m pumped to be here with my debut interview. Astroreign started back in late 2014 or early 2015 and it was initially heavily inspired by Knife Party. Rob Swire was basically my god (and still is, to some degree). I tried to model everything I did after his works, and failed in an epic fashion. Tastes change over time, so Astroreign is no longer an attempted Knife Party clone, however the lessons learned in those early years still influence many decisions today.

Q2: How long have you been producing electronic music?

A2: Around seven years now!

A3: This is a tough one! I’ve never lived or made music outside of Melbourne. After speaking to so many Melbourne producers through my podcast though, I’d have to say that what I love about the scene here is how open and welcoming everyone is.

A4: When making originals, I love how you have the opportunity to just go hog-wild with creativity. However, I feel like that can sometimes make music hard to listen to.
On the flip side, I appreciate how remixes kind of keep things grounded – you have to keep at least some semblance of the original track in there. You can definitely still flex your creative muscles, it just has to be a bit more restrained. I actually feel like that restraint can lead to a greater sense of tension in a song, which is generally more appreciated than going balls to the wall the entire time.

Q5: What has been the highest point in your career? Walk us through that moment of thrill!

A5: Probably the moment when Dub Wubz Promotions said they wanted to sign my Burn The Witch EP, as that was my first label release. The fact that people I’d never met before appreciated my music enough to sign it showed me that I was on the right track with my music

A6: So a couple months ago I did a 30 Day Challenge where I created a new track every day (shoutout to DREER and Skrybe for getting me onto it).
Going into 2021 I’ll have at least 20 tracks to polish up and release.I’m also looking to build traction through the final months of 2020 with my upcoming release; Change of Heart Vol.1. This is planned to be a long-standing series of releases that are purely a creative outlet and not necessarily meant to be DJ-friendly. These are going to be the most unique tunes I’ve released in a long time.
To top it off, I’ve had a lot of time to learn about branding myself and marketing my music. Once shows start coming back, I feel I’ll be able to get my dubstep tunes played in sets and go from there.

Q7: You recently dropped your Score and Ball Licker Remixes, what went into those mentally and physically in regards to creative process(es)?

A7: So my goal with these remixes was to simply make them as heavy as possible. Until this future riddim wave started, all I cared about was being heavy. I recently purchased a new guitar which would’ve come in handy on the Ball Licker remix as the guitar I used on that was just MIDI (though despite being MIDI – Shreddage sounds pretty damn real!).
In terms of bass sound design, I made the most brutal basses that I could at the time. Most of the basses are just a lot of FM, distortion, and OTT.
I struggled quite a bit on Score specifically, as I was trying to make a machine gun bass the main element of the track. I couldn’t get it right though, so the main bass you hear now is different to how I originally wanted it to be. Though now that Code: Pandorum has started teaching on Defyre Society and dropped his masterclass, my machine gun bass game has increased tenfold.

A8: So I’ve got a collab coming out with a bunch of guys in my Discord community – it’s gonna be a weird one because it goes through a bunch of different styles! Outside of that, there’s other collabs in the talks but nothing concrete yet. I’d love to collab with Big Boss at some point, because he brings brutal sound design into other genres rather than just dubstep.

A9: The Melbourne boys are making mad plays right now. MANAFEX with his chopping skills, recently gaining support from Squnto, Subtronics and many others. DREER is doing unique stuff with his ‘sounds of the swamp’ backed by Infekt. Skrybe had a recent collab with JOOL and is a sound design and composition master. Space Prince will make you want to throw down in the pit whilst at the same time pondering life and its endless possibilities. Vital Mode coming in clutch with the melodic gamer tunes that we all need for those long, Mt Dew filled sessions. And finally, Into Ash is a taste-maker with his crazy glitchy sound design. 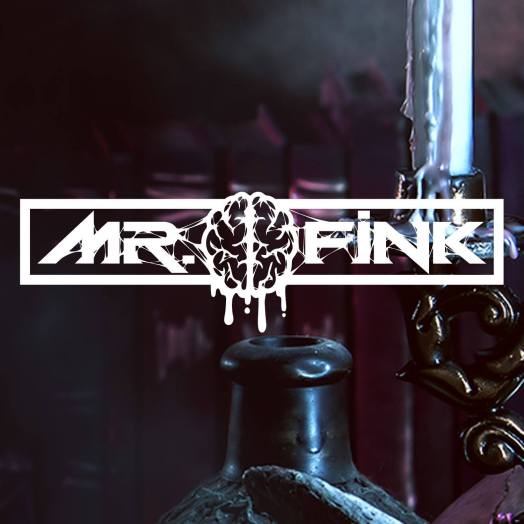 Mr. Fink. The Melting Of Your Mind Commences